The version of your browser is too dated for some of our website features.
For the best digital experience possible, take a moment to update your browser now.

Canberra will be the first Australian city to pilot a publicly available hydrogen vehicle refuelling station.

The clean-energy facility will be built in Mildura Street, Fyshwick, by ActewAGL with the support of renewable energy generator Neoen.

During today’s announcement of the hydrogen project, the ACT Government revealed it will add 20 new Hyundai hydrogen vehicles, funded by Neoen, to its fleet.

“This is a momentous step towards the ACT’s transition to 100% renewable energy and for the next generation of zero-emission transport,” Minister for Climate Change and Sustainability Shane Rattenbury said.

“The ACT is a proud world leader in climate action. We’re on track to deliver 100% renewable electricity by 2020, and to achieve zero net emissions by 2045.

“However, tackling climate change means tackling transport pollution, and zero-emission vehicle technology is a key part of this. By 2020 the ACT will be powered by 100% renewable electricity, meaning our biggest source of greenhouse gas emissions – at over 60% – will come from transport.

“Being at the forefront of a potentially significant new industry for Australia also strengthens our position as a leader in energy innovation and helps us as we work towards our ambitious goal of zero net emissions by 2045.”

ActewAGL CEO John Knox said he was delighted that ActewAGL had been chosen by Neoen to build and operate this landmark project just a few minutes from Canberra’s CBD.

“This is an incredible opportunity to continue our exploration of the role hydrogen can play as an energy source of the future,” Mr Knox said.

“We look forward to welcoming the ACT Government as the first customer of the hydrogen refuelling station, and to examining how we might potentially use hydrogen more broadly as a clean-energy choice for the ACT,” Mr Knox said.

“Neoen has had a long and successful partnership with the ACT Government and will continue to support the Territory’s 100% renewable energy target. This project also represents an important part of Neoen’s local investment commitment to the Territory as part of our Hornsdale Wind Farm project. As a long-term investor in Australia’s renewable energy future, we believe hydrogen represents an exciting opportunity to decarbonise many other sectors of the economy—not only in Australia, but potentially overseas in the future through the export of renewable hydrogen.”

The station is due to be completed in December 2019. For more information visit: https://actewagljv.com.au/jv-strategy/projects/zero-emission-transport 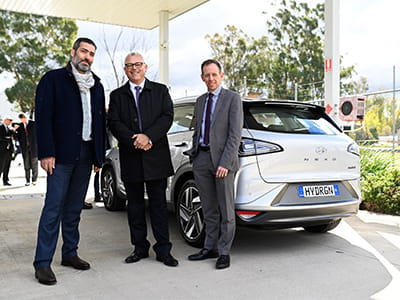 ActewAGL acknowledges the Traditional Custodians of the Canberra region, the Ngunnawal people. We pay our respects to their Elders—past, present and emerging—and recognise their continuing connections and contributions to this region. We also acknowledge the First Peoples of the broader region in which our footprint extends.

Sitemap
X
We use cookies to improve your experience on our site and show your personalised products and services. To find out more, read our privacy policy.
YES, I ACCEPT